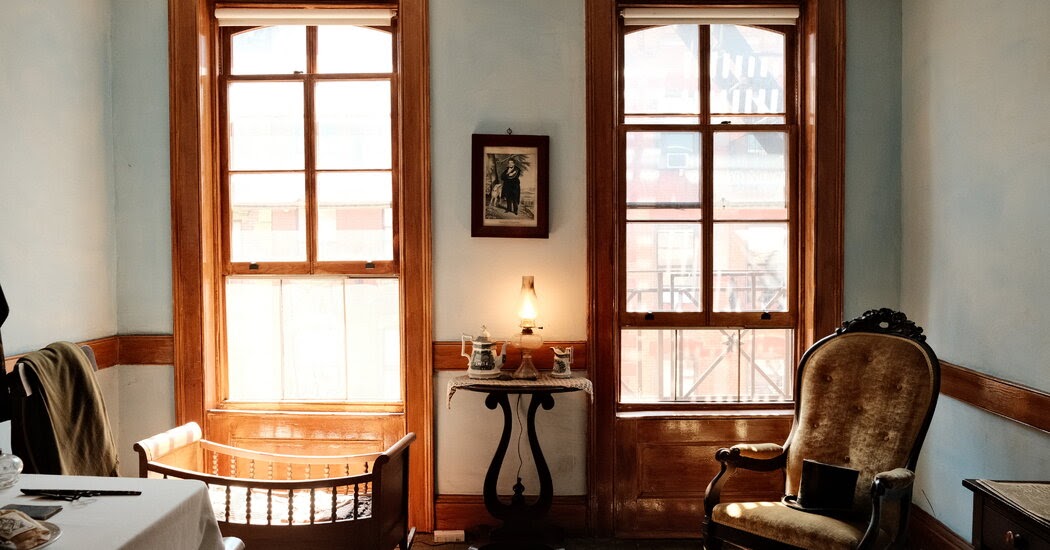 There is no shortage of ghosts at the Tenement Museum, which for nearly three decades has explored the issues of immigration, housing and belonging through tours of the meticulously recreated apartments in its five-story building on the Lower East Side. But in recent years, the story of a particularly spooky presence has remained in the background.

In 2008, shortly after opening an apartment that told the story of Joseph Moore, a 19th-century Irish immigrant waiter, a museum educator noticed something interesting on an 1869 city directory. Right above Moore’s name was another Joseph Moore, also a waiter, who lived a few blocks away.

Same name, same profession. But there was one more designation: “Col’d” or Colored.

The educator began to invite visitors to think of the two Joseph Moores. How would their lives have been similar or different? As other educators picked up the story, a conversation arose about how to talk about “the other Joseph Moore” and the museum’s broader omissions.

Now, as the museum celebrates its reopening with a neighborhood party on June 12, it’s getting very close to the story of the Black Joseph Moore. He is looking for a recreational apartment dedicated to him and his wife, Rachel, the first dedicated to a black family. And it is introducing a walking tour of the neighborhood called “Recover the black spaces”, which explores sites linked to nearly 400 years of African American presence on the Lower East Side.

The museum is also reviewing all of its apartment tours, to look more clearly at the ways in which race and racism have shaped the opportunities open to mostly white immigrants whose struggle and commitment are being explored there.

“Basically, we’re taking everything apart and putting it back together again,” said Annie Polland, president of the museum, in an interview last month, after taking a peek at the unrestored top-floor apartment that will be dedicated to the black Joseph Moore.

“Ideas about race were important in understanding each family’s experience, at all times, in New York and the Lower East Side,” he said.

The reopening comes after a tumultuous year for the museum. Last spring, the arrest of the pandemic sent him in a financial breakthrough, leading to the dismissal of much of its staff, who were also in the midst of a litigation union push.

And in June, following the killing of George Floyd by the police, some staff members protested against what they considered insufficient the museum. statement of support for Black Lives Matter. The museum was released quickly a second, more self-critical affirmation, pledging to “address the harmful ways we have educated on the history of immigrants, migrants and refugees, omitting the history of blacks”.

The museum, with its annual prepandemic budget of $ 11.5 million, could be a small institution. But it’s taking on a huge – and enormously tense question: how does a museum – and a nation – celebrating the immigration experience incorporate the stories of blacks who were brought here unintentionally and who for centuries have been excluded from opportunity and full citizenship open to most newcomers?

“The museum has always looked at the question of how people become American,” said Lauren O’Brien, lead researcher on the Joseph Moore project and the new walking tour. “But what does it mean to be born an American, but not seen as an American?”

“This is our Ellis Island”

The first stop on the walking tour, near the corner of Allen and Rivington Street, just a few blocks north of the museum, makes it clear that people of African descent were part of New York from the beginning.

In 1640, it was the site of the six-acre farm of Sebastian di Britto, one of a group of African slaves who in 1647 successfully asked the Dutch East India Company for partial freedom and land. His farm was part of a larger area outside the official borders of New Amsterdam known as the “Land of the Blacks”.

That first black presence has become better known since 1991, when the remains of a colonial-era African cemetery were discovered in Lower Manhattan, prompting David Dinkins, the city’s first black mayor, to declare, “This is our Ellis Island.”

In the museum’s archives, O’Brien discovered a letter from a woman named Gina Manuel from 1988, the year she was founded, inviting the founders to include the story of the Black Lower East Siders.

“When you are designing the museum, please, please, please don’t forget them,” he wrote. “Their spirit walks in those halls, and their bones lie there in the earth, and we remember them.”

O’Brien also found evidence that in the museum’s early years there had been a narrative around a 19th-century composite black family called the Washingtons. But that vanished, as the museum focused on its distinctive approach: tours of the recreated apartments that focused on families who had actually lived at 97 Orchard Street between 1863, when the building was erected, and 1935, when it was closed with boards.

This created a magical physical time capsule, but also a limitation. Today, the eight restored spaces at 97 Orchard Street present the stories of German, Irish, Italian and Eastern European Jewish families. But the museum’s researchers never found any evidence that the more than 7,000 people who have lived in the building over the years included black families.

In 2017, the museum opened a second building just above the block, which allowed it to add stories of a Chinese immigrant and a Puerto Rican family, and extend the timeline to the 1980s. But the researchers also did not find clearly documented black residents, immigrants or natives, in that building.

By that time, some educators had begun to fill in the gaps with Joseph Moore’s “other” story.

“People talked about it in their own way,” said Daryl Hamilton, the educator who first noticed the two Josephs on the city list and mentioned him on his tour. “One of the great things about the Tenement Museum is that we educators are left to interpret and present things in ways that seem right to us.”

Over the years, the museum has also invited black history scholars such as Leslie Harris, the author of “In the Shadow of Slavery: African Americans in New York City, 1626-1863”, to speak to his staff. And in 2019, he hired O’Brien, a graduate student at Rutgers University-Newark, to research what became the “Reclaiming Black Spaces” walking tour.

For some of the museum staff, that wasn’t enough. In a recent article on labor problems At the museum published in The Public Historian magazine, Erin Reid, an educator who was fired last July, said executives did not support all educators’ approach to Black Joseph Moore’s story.

Polland, who became president of the museum in January (after a stint as head of programs and interpretations from 2009 to 2018), acknowledged that some educators “felt unheard”. And he said previous reviews of the Irish apartment tour had left some difficult questions “unresolved”, including how to incorporate complex topics like 1863 civil war riot projects, during which white mobs (including Irish immigrants) attacked black New Yorkers.

But the museum, Polland said, “was listening and trying to figure out the best ways to handle the material, given the structure they had.”

Joseph and Rachel Moore’s apartment, on the fifth floor, won’t open until fall 2022. But starting in July, Moore’s current tour, called “Irish Outsiders”, will be replaced with a hybrid tour that will talk about both. i Joseph and will offer a preview of the museum’s detective work.

The Black Moore was born free in 1836 in Belvidere, NJ, a rural town halfway between New York and Philadelphia. (Slavery was not completely abolished in New Jersey until the Civil War.) He moved to New York in the late 1850s.

In 1869, as the list shows, he lived in a back apartment at 17 Laurens Street in what is now SoHo. (Both the street and the building no longer exist.) In 1860, the Eighth Ward – and Moore’s apartment – housed a mix of black, Irish, and married black and Irish families.

The museum talks about Moore as a kind of internal immigrant who came to New York to seek opportunities, and perhaps greater security, at a time when the Fugitive Slave Act also put free blacks in danger of kidnapping. In mid-19th-century New York, serving at tables was a high-paying job, with black waiters in high demand. (The finished Moore apartment will include a copy of an 1848 manual by hotel administrator Black Tunis Campbell, believed to be the first of its kind.)

And highly skilled black waiters were sometimes paid more than their white immigrant counterparts, in part, notes Professor Harris in Harris a movie made for the museum’s recent fundraising gala, because they had organized and fought for those wages.

The history of relations between blacks and Irish New Yorkers is often remembered as a story primarily of antagonism, which flared up in violence in the Riots of 1863. And after the Civil War, according to Harris, black waiters were increasingly rejected, as white patrons they asked to be served by the whites.

But the picture, the museum points out, is more complicated. After the riots, some 2,000 black residents fled the city. But in 1869 Moore was still there. Did he have alliances with his Irish neighbors who helped protect him, O’Brien wonders?

With many of the European immigrant families whose stories are told at the museum, their descendants have climbed the socioeconomic ladder, leaving social housing for middle-class prosperity in the suburbs.

In 1880, Joseph Moore lives in Jersey City. But then his tracks, at least so far, cool down. And for African Americans in general, O’Brien said, the upward trajectory of inclusion in the American dream has often been blocked.

“You don’t have that neat, clean ending,” he said. “There is no resolution to be considered an American.”

There is a lot to discover on Black Joseph Moore, including, the museum hopes, some living descendants. But the intricacies of black history, Polland said, are part of every American’s history, no matter how and when their family got here.

“We’re rediscovering ourselves and trying to figure out who we are,” he said of the museum. “Once you start looking for this story, it’s all around us.”