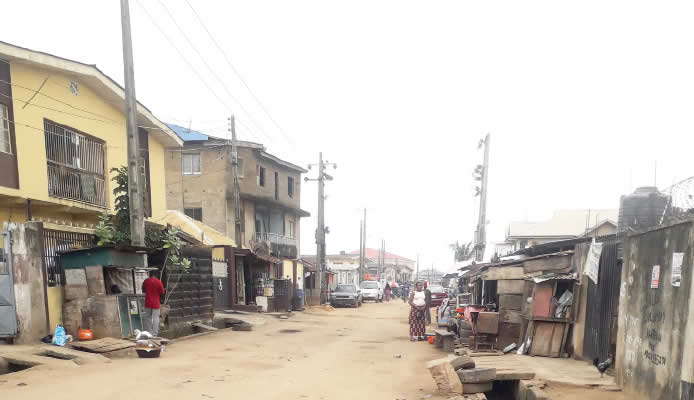 Olabisi Opeyemi, a retailer on Felicia Oke Street in the Olowora area of ​​Lagos state, is saddened by the loss inflicted on her by a suspected thief who disguised himself as a customer to steal two bags of rice from his shop.

City tour he learned that the suspect, still a fugitive, went to the shop on Thursday afternoon with two boys who were said to be around 15 to buy two 50-kilogram sacks of rice.

It turned out that he had Opeyemi’s younger sister Alima, who was in the shop at the time, believe that the boys were his brothers and that their mother also had a shop nearby.

Leaving the boys behind, he reportedly stuck away on a commercial motorcycle, promising he would be back to pay soon.

When he didn’t return a few minutes later, one of the boys would go looking for him. It is learned that Alima raised the alarm as the other boy, resident in the area, wanted to leave.

She realized she had been defrauded when the teenager told her she didn’t know the man and was only asked to help him carry a load to the store.

It was not possible to ascertain whether the boy who went in search of the suspect was also used as a ‘guarantee’ as he did not return to the shop.

The shop had yet to open when our correspondent visited the neighborhood around 11 on Friday.

Opeyemi, who he spoke with City tour on the phone, she said she was devastated by the loss of the goods, adding that the theft put a strain on her capital.

She said she didn’t report the incident to the police because she knew the boy’s poor mother who begged her to let the matter go.

“She did not come back to me to inform me that the person wanted to go with the goods. It was later, when she realized she had been cheated, that she called me. She said the man left with two bags of rice and told her that the man said he should give him a few minutes to collect money from his mother at a nearby shop.

“She deluded herself that those boys were the man’s brothers. He asked them to wait for him and left with two 50 kg of foreign rice worth N60,000. We then realized that he had met one of the guys on the street and asked him to help him carry a load to our shop. The boy’s mother came yesterday (Thursday) and was begging. I had to let go even if it is a great loss for me ”.

Alima explained that the man initially came with the unknown boy on a bicycle to find out the price of a sack of rice.

He said he left after getting the price and returned shortly after with the boy who resides in the community.

Alima said: “The man sat inside the shop and called a woman on the phone in my presence. I could hear the woman’s voice. She asked him if the two bags were long grain rice. He told her that one was short-grained while the other was long-grained.

“The woman told him to buy it. Then he called an okada rider and asked the two boys to take out the bags of rice. As he left with the rice, he said, “My brothers, wait for me to get the money from our mother’s shop.”

“After a while, I began to wonder why it took too long to return. I asked the boys where their brother was but they said they didn’t know him. The guy he came with first got on his bike and went looking for him. The other boy, who I later learned lives around here, was about to leave when I dragged him back. He said the man met him on the street and asked him to help bring something to the shop. ”

Our correspondent overheard the residents discussing the incident, with some insinuating that the man probably hypnotized Alima.

All rights reserved. This material and other digital content on this website may not be reproduced, published, transmitted, rewritten or redistributed in whole or in part without the prior written permission of PUNCH.