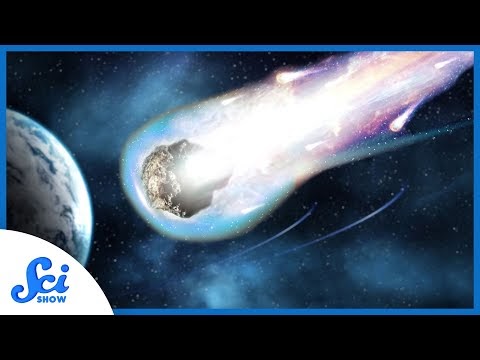 “SciShow Space” on Youtube shows you that experienced scientists are constantly discovering new objects in the solar system. Most of these are small asteroids or icy bodies, but researchers recently spotted something unexpectedly huge heading our way.

A comet is a small frozen body in the Solar System that, when it passes close to the Sun, heats up and begins to release gas, a process called degassing. This produces a visible atmosphere or coma, and sometimes even a tail. These phenomena are due to the effects of solar radiation and the solar wind acting on the comet’s nucleus. Comet nuclei range from a few hundred meters to tens of kilometers in diameter and are composed of loose collections of ice, dust and small rock particles. The coma can be up to 15 times the diameter of the Earth, while the tail can extend beyond an astronomical unit. If bright enough, a comet can be seen from Earth without the aid of a telescope and can subtend a 30 ° arc (60 Moons) across the sky. Comets have certainly been observed and recorded since ancient times by many cultures and religions.

Comets usually have highly eccentric elliptical orbits and have a wide range of orbital periods, ranging from several years to potentially several million years. Short-period comets originate in the Kuiper belt or its associated scattered disk, which lies beyond Neptune’s orbit. Long-period comets are thought to originate in the Oort cloud, a spherical cloud of icy bodies that extends from outside the Kuiper belt halfway to the nearest star. Long-term comets are set in motion towards the Sun by the Oort cloud by gravitational perturbations caused by the passage of stars and the galactic tide. Hyperbolic comets can pass through the inner Solar System once before being hurled into interstellar space. The appearance of a comet is called an appearance.

Comets are certainly distinguished from asteroids by the presence of an extended, non-gravitationally bound atmosphere surrounding their central core.