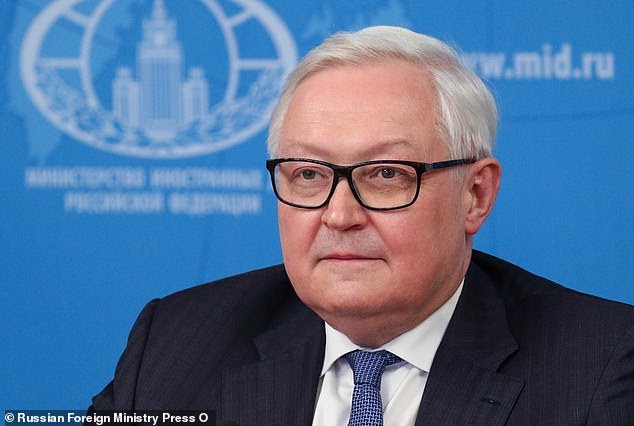 Russian Deputy Foreign Minister Sergey Ryabkov (pictured) promised to bomb a British warship the next time it gets too close to Crimea after warning shots were fired at HMS Defender on Wednesday.

A senior Russian official has issued a warning to the UK and its NATO allies, saying that any repetition of an action such as that taken by the British Navy warship that sailed close to Crimea last month would be met with a response. “More severe”.

The comments of Mikhail Popov, deputy secretary of the Russian Security Council, show the anger still felt by Moscow after the quarrel in the Black Sea caused by the HMS Defender for having crossed the peninsula annexed to Russia.

Russia had also accused the United States of being involved in the incident, which took place against the backdrop of NATO’s Sea Breeze 2021 exercises in the region that Moscow considers its backyard.

In an interview with Rossiyskaya Gazeta, the newspaper that most closely reflects Kremlin thinking, Popov said that the navies of NATO states were being used as a means of putting pressure on Russia.

WNU Editor: If that happens again, my prediction is that a large Russian warship would ram the UK warship (or any other NATO warship). This happened a few times during the Cold War and it worked.

Putin’s forces warn Royal Navy: bring your ships close to Crimea again and your sailors will get hurt – Daily Mail

Tensions erupt when Putin lashes out against the UK and orders British sailors: “Leave our waters!” – Daily Express

Stay away from waters near Crimea or British sailors risk facing the full might of the Russian military, warns Moscow London – RT