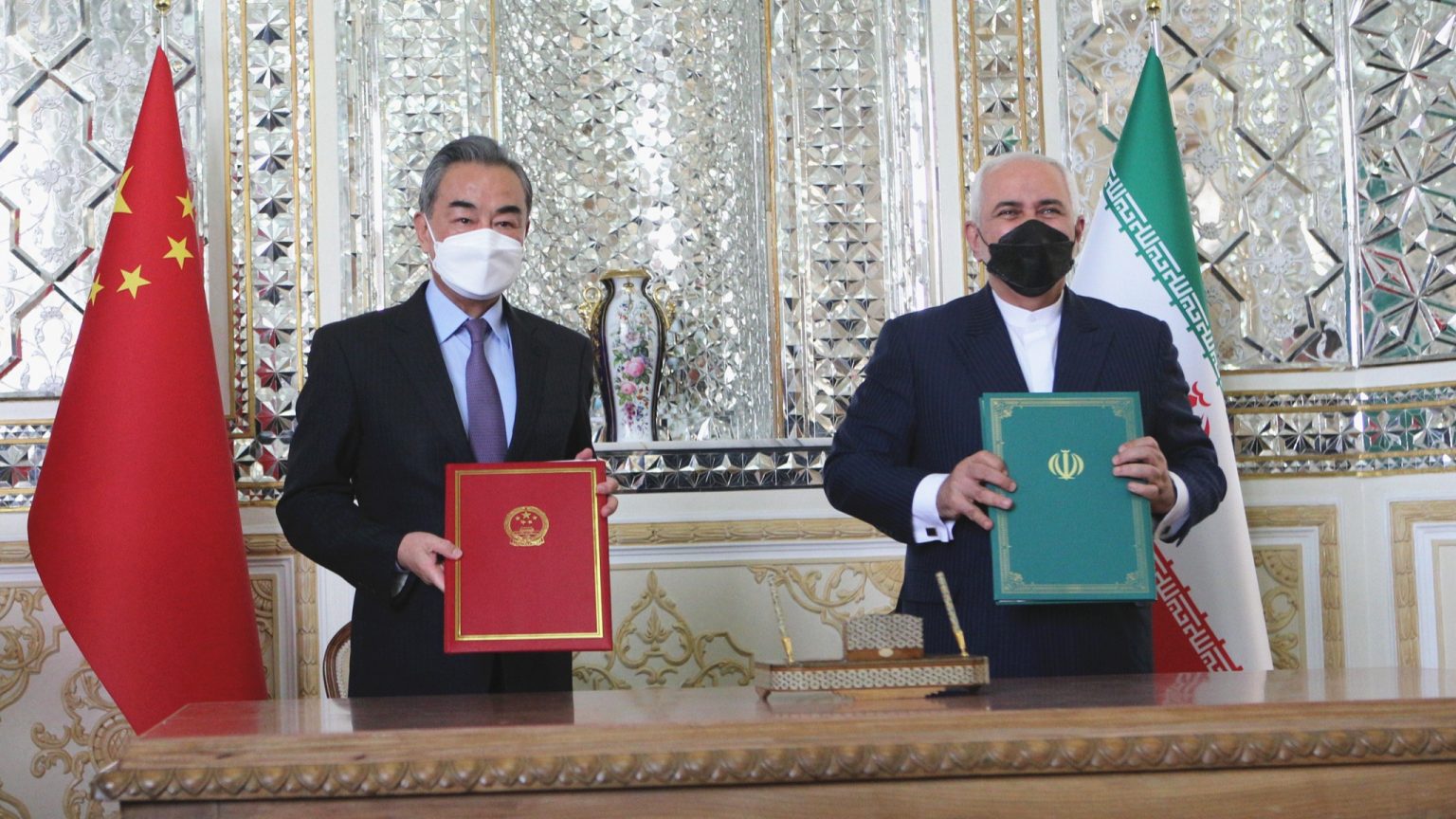 This piece is crossed from Global Justice in the 21st Century, the blog of JWE board member Richard Falk.

[Prefatory Note: the post below consists of my responses to questions posed by the Iranian journalist Javad Heiran-Nia Questions on the China/Iran Agreement (4 April 2021). The agreement, officially known as Comprehensive Strategic Partnership  was signed formally just a few weeks before it was announced that so-called ‘indirect talks’ between Iran and the U.S. were taking place in Vienna dealing with conditions relevant to the U.S. willingness to rejoin the JCPOA (Joint Comprehensive Plan of Action, the international agreement on Iran’s nuclear program, that had been negotiated in 2015 to address proliferation concerns of the UN P-5 + Germany and the sanctions concerns of Iran. The U.S. withdrew from the agreement in 2018 in fulfillment of Donald Trump’s 2016 campaign pledge to do so because it was derided as a bad deal for the West. What accounts for such talks being ‘indirect’ is not covered in the interview, and seems like a hedge against directly failing to find enough common ground to commence overdue ‘direct’ talks.]

1. A 25-year cooperation document between Iran and China was signed. What is the significance of this document for the two countries?

The configured deal worth at least $ 400 billion, carefully negotiated and meaningfully called the Comprehensive Strategic Partnership, promises significant mutual benefits for both countries. For China it offers both a major extension of its Belt and Road Initiative, involving huge infrastructure and investment features, most notably Chinese investment in Iranian energy infrastructure, and an Iranian commitment to supply China with crude oil. It also extends China’s diplomatic presence and economic commitment to a major Middle Eastern country at an opportune time given the current global situation. The fact that the agreement spans a 25-year period suggests that it represents a long-term commitment by China to Iran and Iran to China, assuming continuity of governance structures in both countries.

For Iran, it signals to the United States that Beijing is not isolated and has political alternatives that can invade American strategic interests. It also sends the message that China will not submit to US pressure regarding the restoration of the JCPOA or curtail its regional diplomacy which is contrary to the positions of Israel, Saudi Arabia and the US. The economic dimensions related to infrastructure investment and trade also promise relief from the burdens imposed on Iran and its people by US sanctions and threat diplomacy over a period of nearly 40 years. The long expected duration of the agreements also gives the Iranian government agreements a vote of confidence in terms of stability and legitimacy.

2. In terms of timing, what messages has the signing of this document for the United States?

Timing seems important. From the beginning of Biden’s presidency, he has been sending a double message: China is ready to lend its support to countries under heavy pressure from the United States and that China’s international policies will not be changed by the kind of bullying tactics that they were exhibited by the US Secretary of State, Antony Blinken, at recent bilateral meetings in Alaska. It is also an illustration of the difference between the U.S. emphasis on militarism through coercive diplomacy, arms sales, and foreign bases, and the very different Chinese emphasis on creating Win / Win economic relationships that translate into benefits. reciprocal without involving business intervention or reduction of sovereign rights, although in this agreement it contains a provision on security cooperation, including intelligence sharing and joint training exercises. At times, Chinese diplomacy can undermine national self-sufficiency and the autonomous development of its partners, but its diplomacy appears to remain consistent with peaceful means and mutual benefits.

3. The United States has expressed concern about the signing of this cooperation document. What worries America?

It seems inevitable considering the scope, scope, duration, timing and even the name of the Iran-China agreement would cause Washington concern.

The US has two main concerns: a weakening of its diplomatic leverage with Iran and a further demonstration of Chinese competitive capabilities that exposes the weakness of current US hegemonic approaches to world order, and particularly in the Middle East. The fact that this mega-cooperative deal is located in the Middle East threatens to diminish US regional influence in a crucial strategic context in which it has had no opposition since the end of the Cold War in the early 1990s. This observation is made more plausible by the recent efforts of several major Middle Eastern countries, including Israel and Saudi Arabia, to forge meaningful economic ties with China. The recent goodwill visit by Chinese Foreign Minister Wang Yi to the region has also reinforced the impression that China’s interests and activities in the region are increasing, which may only make Washington nervous about being displaced, or at least threatened. discussion. Mr. Wang set out five principles that delimit satisfactory intergovernmental conduct, which indicated that, if accepted by the governments of the region, it would encourage China to play a supporting role. These five principles, somewhat resembling the principles of peaceful coexistence elaborated and approved by the United Nations General Assembly, are rather benign, but they express aspirations for cooperative relations between states rather than conflicting or hegemonic international relations. [See Declaration of Principles of International Law Concerning Friendly Relations and Co-operation Among States in Accordance with the Charter of the United Nations, GA Res 2625 (XXV), 24 Oct 1970] The five points enunciated are mutual respect, the defense of equity and justice, the achievement of non-proliferation, collective security and accelerated development assistance. Only “achieving non-proliferation” seems a bit strange considering that Israel already has nuclear weapons [for elaboration see “Wang Yi Proposes a Five-point Initiative on Achieving Security and Stability in the Middle East,” PR China, March 26, 2021] In this spirit, the Foreign Minister has ventured to suggest China’s readiness to host a conference on the safety of maritime routes and oil facilities in the Middle East.

4. During Iranian Foreign Minister Zarif’s visit to China, the Chinese Foreign Minister somehow linked the signing of this agreement to the settlement of Iran’s disputes with the countries of the region. But now he has traveled to Iran to sign the agreement. Has there been a shift in the view of China since Biden came to power in the United States? In other words, was China waiting for the policy of the new US administration?

That previous Chinese reluctance to sign the deal was not mentioned very often in the Western assessment of the event, which had been linked to Iran’s success in overcoming difficulties with Arab countries in the region. This somewhat unusual request, and now China’s change of stance, reinforce the circumstantial evidence that the formalization of the agreement at this time reflects a reaction to the broader political context. In particular, it suggests that China is ready to demonstrate its steadfastness and independence vis-à-vis the United States. It’s a warning to the Biden presidency that if the United States forcibly challenges China’s regional sphere of influence in the South China Seas, China has ways to retaliate. China could still hope for an easing of tensions when the negative effects of the start of a new cold war are better appreciated by Biden’s leadership. This is speculative on my part as nothing formally articulated suggests that such reconsideration is underway in Washington. The irresponsible accusations of ‘genocide’ perpetrated by the Chinese government against the Uyghur minority in the Xinjiang area suggest a further deterioration in relations, accusations that will surely further inflame relations between these two great countries.

However, Washington’s cautious signs of willingness to move towards resuming JCPOA negotiations could also be indicative of a new American interest in neutralizing China’s leverage and influence in Tehran. And in addition to this, to keep open the possibility of limiting the clashes to peaceful forms of competition, on a regional and global level.

The underlying agreement, officially known as Global strategic partnership was formally signed a few weeks before it was announced that so-called “indirect talks” between Iran and the US were starting in Vienna to address US conditions and demands related to its willingness to join the Joint Comprehensive Plan of Action , the international agreement on the Iranian nuclear program, which was negotiated in 2015 to address the proliferation concerns of the UN P-5 + Germany and concerns about Iran’s sanctions. The United States withdrew from the agreement in 2018 in fulfillment of Donald Trump’s 2016 campaign commitment to do so why he was mocked as a bad deal for the West. What explains how such talks are “indirect” is not covered in the interview and looks like a cover-up against direct bankruptcy in finding sufficient common ground to start late “direct” talks

5. One of the important issues raised for this cooperation document is Iran’s land connection with Iraq and Syria. In this way, China can connect to the Mediterranean Sea through Iran, Iraq and Syria. Iran has a strong presence in the Syrian port of Tartus, and pro-Iranian forces also control the Bokmal border crossing in the Syrian province of Deir ez-Zor and the al-Qaim crossing in the Iraqi province of Anbar. How feasible do you think this path is?

I am not in a good position to make any informed judgment beyond expressing the view that this type of projection is consistent with other agreements concluded under the Belt and Road Initiative, which has leveraged Chinese capital and skilled labor for similar development projects. in Asia and Africa. All of these countries will benefit when such plans go ahead and would reinforce the temptation to preserve political independence in Iraq and Syria to encourage such agreements, which could be part of a broader strategy of protecting the national security of vulnerable countries by practicing the equidistance diplomacy, that is, maintaining viable relations with both the United States and China without aligning with either, and thus maintaining freedom of maneuver.

China’s deal with Iran, officially known as Global strategic partnership was formally signed a few weeks before it was announced that so-called “indirect talks” between Iran and the United States were taking place in Vienna on the conditions relating to the United States’ willingness to join the Joint Comprehensive Plan of Action (JCPOA). Iran nuclear program agreement, which was negotiated in 2015 to address UN proliferation concerns P-5 + Germany and concerns about Iran sanctions. The United States withdrew from the agreement in 2018 in fulfillment of the Donald Trump’s 2016 campaign commitment to withdraw because the deal was mocked as a bad deal for the West. What explains how such talks are “indirect” is not covered in the interview and appears to be a cover against the failure to achieve sufficient common ground if the parties were to start late “direct” interviews without adequate preparation. The indirect ones really intend to explore whether the negotiations had a reasonable prospect of success.