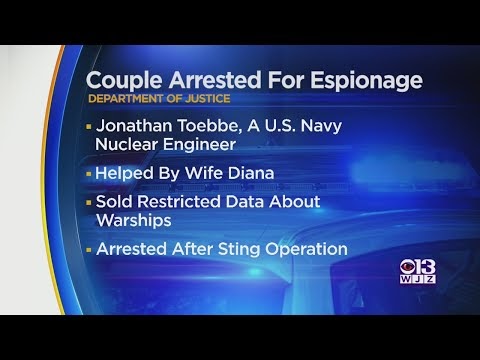 Daily mail: The US nuclear submarine engineer and his wife are accused of passing secrets to a foreign government hidden in sandwiches with PEANUT BUTTER after being paid $ 70,000 in cryptocurrencies, but in reality they were dealing with undercover FBI agents

* Court documents show that Toebe has unknowingly communicated with FBI agents about these secrets in a pattern that stretched from December 2020 until now.

* According to the Department of Justice, Toebbe received separate cryptocurrency payments totaling $ 100,000

* He and his wife were charged with conspiracy and “disclosure of confidential data,” according to a criminal complaint obtained by Dailymail.com

A US Navy nuclear engineer and his wife were accused of selling secret information about nuclear submarines to an undercover FBI agent posing as a foreign country agent, the Justice Department said Sunday.

In a criminal complaint detailing espionage allegations against Jonathan Toebbe, 42, and his wife Diana, 45, the government said it had been selling information for nearly the last year to a representative of a foreign power.

The FBI says that in April 2020 Toebbe sent a package of Navy documents to a foreign government and wrote that he was interested in selling information on Virginia-class nuclear submarine reactors.