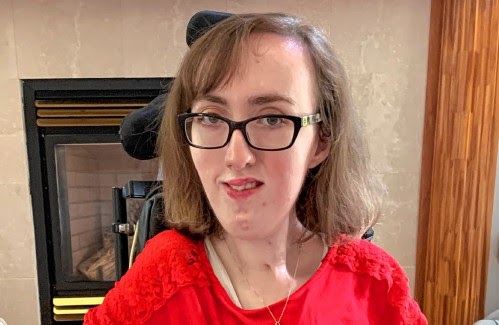 For those of you who know my column or are reading it for the first time, I would like to start this article by touching on something very important; my disability does not define me. In the 22 years that I have been in this world, it has never been like this and never will be.

Now you can look at this sentence and shake your head in disbelief as you think about how her disability cannot define her when she needs help with anything from using the bathroom to vacuuming the bathroom. excess saliva from the throat several times a day? And you would be partially right in this statement. Yes, my disability limits me physically in many ways, but it has also allowed me to focus and expand on my other strengths.

It is a conscious decision that I, along with many other people with disabilities, must make every day, to see the good things it has brought into my life instead of mulling over the things it has brought to me. taken. Because as anyone can imagine the latter is very easy to do and, moreover, it is a story instilled in society for centuries.

And, in my opinion, the time has come for this age-old perception to be eradicated.

From an early age I have always wanted to redefine how others perceive disability – and me, as an individual with extremely obvious limitations. And with a degree in not one but two majors behind me, I’ve been a pioneer in many ways. But every time I walk into a public place, I am continually reminded how far people with disabilities are from being treated as equal members of society.

Earlier this summer, I was browsing Twitter one evening when I came across a thread of people with disabilities discussing the ability and, to be honest, bordering on debasement, encounters that most of us experience. whenever we dare to leave our homes. As I browsed through the multitude of tweets in the thread, there were two types of these cases that were more prevalent than others in individuals’ legitimate rants of frustration – each relating to times when strangers approached them in an unintentionally offensive manner. manner, but still undignified.

The first was the most common, according to the common thread: where whenever strangers – or people who do not know the disabled person – talk to a disabled person, it is extremely common for them to talk to their caregiver standing next to the person they are staying. speaking, instead of the person himself.

The second referred to the habit of people touching people with disabilities, out of pity or sympathy for people like mine.

As I read the tweets, my heart suddenly deepened, not only because I deeply sympathized with individuals, having been in their situation countless times, but because it was the first time I realized how humiliating behavior towards people like me was normalized. they became.

Growing up I had no friends with a visible disability, so when people asked my mom about me outside the church or when we went shopping while I was sitting next to her, I never thought about it. I attributed people’s aversion to talking directly to me to my speech impediment and the fact that people who meet me for the first time rarely understand my way of speaking.

I thought it was just me who felt pitying looks when people caress my hand, or worse, my head, when they realize I can’t move my hand to shake theirs during introductory moments. that has always left me wishing I could disappear into the sidewalk beneath me. When I was little, people had even fewer barriers and wanted to touch me all the time; to the point that I put a sign on my wheelchair that said, “Wash your hands before you touch mine.” Surprisingly, people have not yet received the hint even with the sign.

It wasn’t until my college days, when I started making friends with people in similar situations to mine, that I began to realize these weren’t isolated incidents. But I didn’t realize how widespread these behaviors had spread in society until I saw this thread on Twitter. And I would like to take this opportunity to address some of the stigmatized perceptions that I believe underlie these behaviors.

I am also a human being and having a disability does not affect the quality of my life and compassionate looks give me nothing but a self-esteem complex. I want to be treated with respect and dignity regardless of my physical limitations; which includes strangers speaking to me directly, instead of being in the third person, and not stroking me as if I were a child.

If you take anything from this article, let it be this: next time you meet a person with a disability in public, remember that they are human, just like you. And before you are tempted to participate in any of the above actions, please take a moment to put yourself in their shoes and think about how you would like to be treated.

Gazette columnist Joanna Buoniconti just graduated from UMass Amherst. She can be contacted at [email protected]