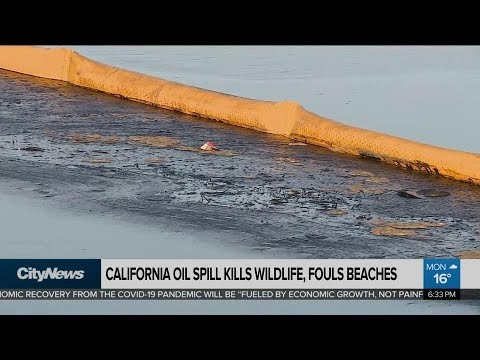 CityNews on Youtube shows that a major oil spill is threatening wildlife off Southern California. Melissa Duggan on the fast run to clean up the slick on the go.

An anchor hooking an oil pipeline may have caused the Southern California spill that spewed more than 100,000 gallons of oil into the Pacific Ocean. This is according to the Federal Pipeline and Hazardous Materials Safety Administration.

This disaster happened to the operator “Amplify Energy”. “The pipeline was essentially pulled like a bowstring. And so at its widest point it’s about 105 feet away from where it was. So it’s almost a semicircle,” Amplify Energy CEO Martyn Willsher said in a press conference on Tuesday. .

On Tuesday, authorities said a 4,000-foot section of the pipeline was shifted sideways by about 105 feet and had a 13-inch crack that was likely the source of the spill.

The discovery explains the likely source of a widely reported spill on Saturday of 144,000 gallons of crude oil about 5 miles off the coast of Huntington Beach. The spill blocked many beaches and damaged the environment.

A so-called “oil spill” is the release of a liquid petroleum hydrocarbon into the environment, particularly in the marine ecosystem, due to human activity, and it is certainly a form of pollution. The term is usually given to oil spills at sea, where oil is released into the ocean or coastal waters, but spills can also occur on land. Oil spills can be due to the release of crude oil from tankers, offshore platforms, drilling rigs and wells, as well as spills of refined petroleum products (such as gasoline, diesel) and their by-products, heavier fuels used by large ships as fuel of the bunker, or actually the spill of oily waste or used oil.

Oil spills could enter bird plumage and mammal fur, reducing its insulating capacity and making them more vulnerable to temperature fluctuations and much less floating in water.

Cleaning up and recovery from an oil spill is difficult and depends on many factors, including the type of oil spilled, the water temperature (which affects evaporation and biodegradation), and the types of coasts and beaches involved.

Oil spills can have disastrous consequences for society. The accidents caused by the oil spills have sparked intense media attention and political turmoil, bringing many together in a political struggle over the government’s response to oil spills and what actions can best prevent them from happening again.

“Oil” is a widely used product. Many people are looking for an “oil change near me”. The price of oil depends on the frequency of oil spills. Some oil prices will change based on the oil spills that occur.

These are the major oil companies of the world: