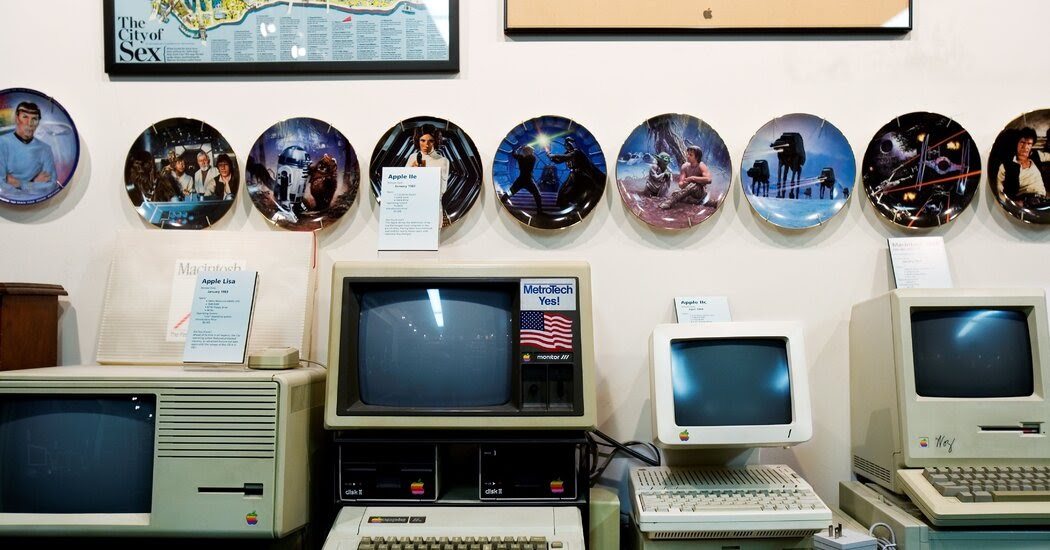 Long before the first sparkling Apple Store arrived in Manhattan, there was Tekserve, the independent Macintosh computer repair shop that opened on West 23rd Street from 1987 to 2016. For those of us who were customers, it provided reliable service in a space trendy decorated with Mac, a hanging swing and an old coke machine with a glass bottle. If your PowerBook 1400 stopped or your printer was constipated due to paper jams, Tekserve was here to help.

Tamara Shopsin directed “LaserWriter II”, her first novel, at Tekserve in the late 1990s, before smartphones and social networks became ubiquitous. It’s the story of 19-year-old Claire, who searches for a goal and spends her free time illegally attending philosophy classes using someone else’s lost Columbia student ID. She is a quiet idealist: “Claire was drawn to the kind of anarchy that believed in small communities and kept the promise of a just society. Everyone had said, ‘life isn’t fair’, but maybe it could be.

He also loves Macs. A help-seeking ad on a bulletin board leads him to a job interview at Tekserve, then to a bizarre new working family, which includes sound engineers, theater people and a Bulgarian electronic assistant. They are all overseen by the company’s unorthodox founders, David Lerner and Dick Demenus.

Despite her inexperience, Claire was soon enlisted in the press department, where one of her first jobs was repairing the formidable LaserWriter II, a large 45-pound piece of hardware. He just has a design flaw, his coach Joel tells him, and it takes 10 years to emerge. “Joel stops to catch his breath,” writes Shopsin. “Claire is on the edge of her chair. He concludes: “The fan blades deform over time and suck up dust. This dust eventually penetrates the optics and forms ghost pages.

Shopsin, reluctant to read his novel like an engineering textbook, even with the gripping drama of industrial design problems, takes a creative approach, anthropomorphizing the guts of the machine in reaction to invasive repair: Sontag said: “Courage it’s as contagious as fear.

Inside a LaserWriter II, Claire discovers that “the universe makes sense”. Shopsin – also illustrator, cook, co-owner of a restaurant and former printing technician – is clearly on comfortable ground, tracing Claire’s existential quest in short, unstable sentences and paragraphs, which create a tense pace, even when describing the business around. to the aquarium office. (Shopsin attributes his prose style to his work as an artist, telling the Los Angeles Review of Books, “My illustrations are scarce; they tend to leave gaps that the viewer fills in. These gaps are also part of my writing.”)

In addition to the talking parts of its protagonist’s printer, Shopsin also weaves the true business stories of Tekserve and Apple into the book. These secondary journeys into geek memory will delight many older nerds who crave the days when Apple was still a fiery little outlier in a Windows PC world, and not the $ 2 trillion Big Tech Bigfoot that it is. today. Readers who want a more linear narrative (or those who have never been brainwashed in the Mac cult) can fidget with diversions, even against the backdrop of Claire’s story.

As demonstrated in “Stupid Arbitrary Goal” his 2017 memoir in Greenwich Village, Shopsin has a knack for capturing the smallest detail of a specific era in the ever-changing city of New York, just like the immigrant of Paule Marshall in the 1950s in Brooklyn or Joseph Mitchell’s mid-century character studies in the five boroughs. “LaserWriter II” is a screenshot of a less gentrified East Village in the last decade of the 20th century, with punk rockers crouching in an apartment on Avenue B, a broke intern selling CDs to Mondo Kim in St. Marks Place, and remarks acute of Tekserve and its people. It’s a stark remake of an era when Apple Computer was the rebellious choice, poor rebels could afford to live in the Big Apple, and in more ways than one, people would hang out. disconnected.