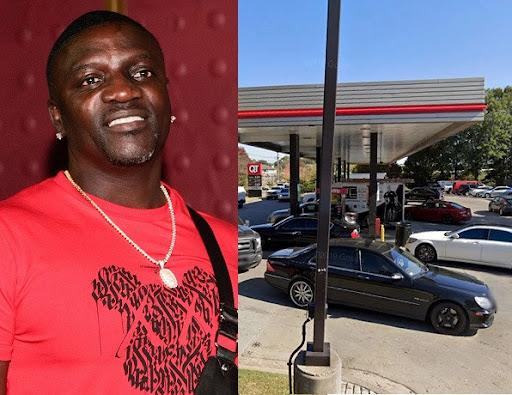 The Senegalese-American singer Akon lost his car while he was getting gasoline.

The incident occurred Monday night, May 24, in the Buckhead neighborhood of Atlanta, at a gas station.

According to the Atlanta Journal-Constitution, Akon stopped at a Quiktrip gas station to fill his white Range Rover with gas. He left the car running with the keys inside the vehicle so he could fill up with petrol. Before she finished, however, she noticed someone driving away in her car, which contained valuables, including a $ 25,000 diamond necklace, a Louis Vuitton bag, and her iPhone.

Akon called the police, who arrived at the gas station at 11:59 pm. He told authorities that a dark-colored sedan followed his SUV as he turned right onto Sidney Marcus Boulevard. Surveillance footage of the theft confirmed his account.

A police report stated that the video showed the sedan as it entered the station right next to Akon’s SUV.

“Shortly thereafter, you can see the suspect step off the passenger seat of what appears to be a black BMW four-door sedan, climb into the driver’s seat of the victim’s vehicle, and drive off with the black BMW following them,” read the report.

Since her phone was left in the vehicle when it was stolen, Akon has reportedly used the FindMyPhone app to track down her phone and find her car. He was first taken to Lawton Street in southwestern Atlanta, but when the police went there, they were unable to find him. The second time, after the app determined that the vehicle was in Forest Park, it was recovered by the Forest Park GA Police Department and returned to Akon on Tuesday morning (May 25).

No arrests were made in connection with the theft of his car.