A nurse prepares to administer the Pfizer-BioNTech COVID-19 vaccine to Dr. Jean-Christophe Richard at La Croix-Rousse hospital in Lyon, France on Wednesday. Amid public protests, the French health minister promised on Tuesday an “exponential” acceleration of his country’s slow coronavirus vaccination process. 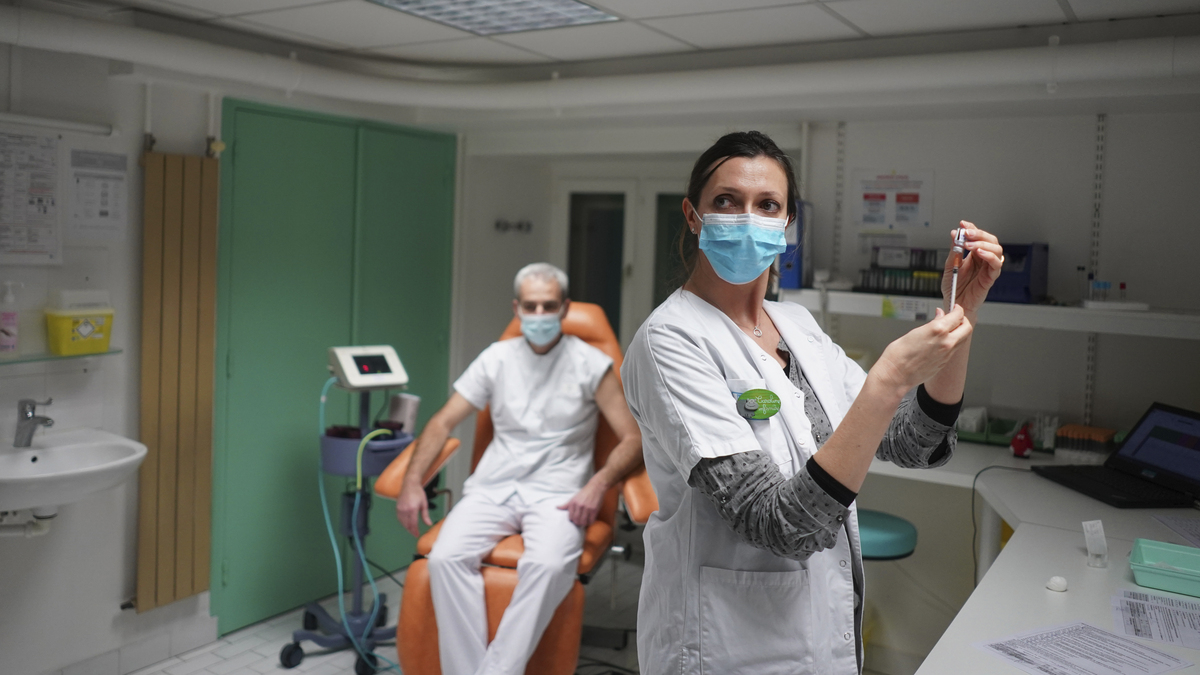 From France to Germany to the Netherlands, Europeans are venting frustration at the pace of the launch of their COVID-19 vaccine.

The European Union began administering the Pfizer-BioNTech vaccine on December 27, two weeks after the United States and nearly a month after the United Kingdom, which recently left the EU.

Holland just started on Wednesday. A former senior health official, Roel Coutinho, called the Dutch strategy “shameful” and warned it “will cost lives,” according to the BBC.

Around the world, many pandemic-weary citizens are waiting for COVID-19 vaccines. But in much of Europe, where some governments have passed successive sets of restrictions to stop the rapid spread of the virus, the public expected more efficient vaccination programs.

Some of the strongest reactions are in France.

It has the highest number of confirmed coronavirus cases in the EU and the second highest number of deaths from COVID-19. Yet, as of Wednesday, France has only administered 5,000 vaccination doses to its nearly 65 million people, according to Our World In Data, a website run by the University of Oxford. In terms of vaccine doses per capita, France is at the bottom of the chart on the data website, behind countries with far less wealth, including Mexico and Argentina.

French Health Minister Olivier Véran tried to quell the turmoil over the slower pace in the country. “We are amplifying, accelerating and simplifying our vaccination strategy,” he told French radio station RTL. “We will vaccinate at the same rate as our neighbors within a few days.”

Analysts say France has taken a cautious approach due to its broad movement against vaccines.

Antoine Bristielle, a researcher with the Jean-Jaurès Foundation, a center-left think tank, says polls show that nearly half of French people say they won’t get the vaccine.

“The main reason is that a lot of people don’t believe what political institutions say,” he says. “At the beginning of the epidemic there was a level of trust of about 90% in scientific institutions and now it is less than 70%.”

He says distrust has grown after the government’s initial confused and disastrous handling of masks. Millions of masks ordered in previous years have been lost and allowed to expire, leaving a shortage for healthcare professionals. The health ministry initially told citizens that masks weren’t useful for them, before backing off and making them mandatory.

Write in a newspaper Le Figaro, French economist Antoine Levy called the slow launch of the vaccine in France a sign that the country’s lauded public health care system has slipped from the top.

“The French state and the French public administration tend to think that the way they act has to be the best and therefore they are not very anxious to know what is going on elsewhere,” he told NPR.

Levy says that instead of presenting the vaccine as a way out of the pandemic, the government has in a sense appealed to the anti-vaccine field by being extremely cautious and pointing out the possible risks.

Joel Balandraud is the mayor of Evron, a small town in western France, and a veterinarian. It has vaccinated herds of animals safely and efficiently during outbreaks, he says, so why can’t the government do the same for people?

“I’m angry because the state hasn’t been very proactive since the outbreak began, not very fast,” he says.

Balandraud says that as a veterinarian in the home country of scientist Louis Pasteur, one of the fathers of immunology, he is doubly ashamed.

“Today it seems that we have forgotten about science in France,” he says. “Instead of basing decisions on facts, they base them on opinions and fears.”

Health Minister Véran promised hundreds of new vaccination points within a week and relaxed the rules and cut red tape. “We want any French who wants a vaccine to be able to get one,” he said.

Citizens across Europe are blaming their national authorities for the slow start of mass vaccination programs. Some German politicians have criticized the EU as it tries to coordinate vaccinations between the 27 member states.

The European Commission, meanwhile, says it is working as fast as possible to approve a second vaccine, from Moderna, following the European Medicines Agency’s recommendation on Wednesday.

Their country had gained worldwide praise at the start of the pandemic for lower COVID-19 death tolls than other nations and recently made headlines for the rapid establishment of massive vaccination centers. Yet Germany is now behind many others, including Russia, the United States, the United Arab Emirates and Israel, in the part of its population that has taken the blows.

Stefan Kornelius, political editor at South German newspaper newspaper, says the Germans spent the Christmas holidays in silence as they waited for the EU to start vaccinations.

“People want to see these vaccinations happen quickly and quickly and they don’t,” says Kornelius.

Eleanor Beardsley reported from Paris. Rob Schmitz contributed to this report from Berlin.